'Oumuamua - what was it?

'Oumuamua - what was it?

The mysterious object 'Oumuamua passed through the inner Solar System in 2017, the first known object from interstellar space to do so.  Attempts to explain it have suggested that it could have been an asteroid, a comet, a ball of dust, and even an iceberg of solid hydrogen or nitrogen.  None of those fully fit the facts, and Prof. Avi Loeb of Harvard suggests that 'Oumuamua may have been artifical, possibly a solar sail propelled by light pressure.

Science writer Duncan Lunan has reviewed the evidence for the online journal Concatenation, particularly in light of Prof. Loeb's bestselling book "Extraterrestrial".  It turns out that the case for the solar sail is even better if it's taken to be under active control, and Duncan has suggested several possible designs and a mission profile for it, ideas which Prof. Loeb described as 'Very interesting', wishing him success with publication.

Duncan's article can be found at:

As a result, more evidence has come to light, and the British Interplanetary Society has requested a follow-up article, on which Duncan is working now.

Duncan will present his ideas at the monthly meeting of the Astronomers of the Future Club, meeting in the RSAS Barassie Works Club, 4 Shore Road, Troon, KA10 6AG, at 7.15 p.m. on Wednesday September 29th.  The meeting is open to the public and attendance costs £3. 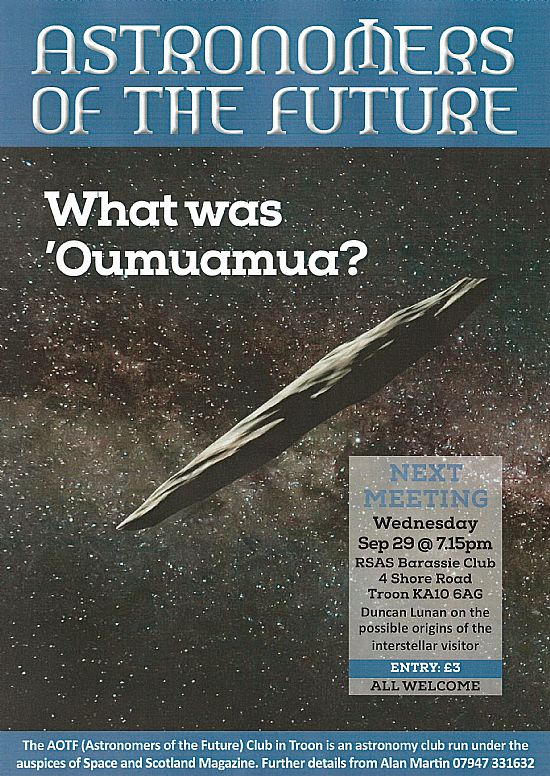